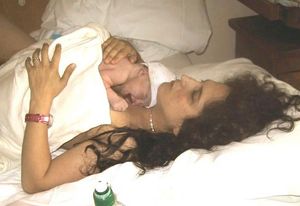 That day, Wednesday, I had been to see my midwife in the office and was told I was almost 2 centimeters dilated. She did a little bit of cervical manipulation to hopefully get some contractions going and then I was sent on my way.

David and I had already dropped Bebe off with our babysitter, so we headed back to Jersey City. We had some lunch, then I took a nap and by 4 pm I was up and complaining that the house was too messy. I decided to watch my favorite daytime television show "Judge Judy" when suddenly I started having some very strong contractions. David tried timing them, but they weren't following a distinct pattern. A few minutes later, I was really in some pain. I got into the bathtub while David called the midwife's office. Another contraction hit while he was on the phone and the midwife could hear me howling like a monkey in the background -- she told David to get me to the birthing center pronto.

By now I was feeling terrible. I did not want to move, but David was forcing me to. Our supply bags were packed - we just needed to get me dressed and down the stairs to the car, but I kept getting hit with these short intense contractions. On the way down the stairs my water started to break and that's when I panicked. "No, I can't do this - I don't want to go, I need to stay here," I pleaded. I knew full well that water breaking generally meant labor was going to speed up and get more intense. The last place I wanted to be was in our filthy car.

But David pushed me onward and into our car where I got into the classic "laboring in the car position" which is facing backward, in the back seat. Now, he had a choice to make - Holland or Lincoln Tunnel - and this was a big decision. Lincoln would bring us closer to the birthing center (58th and 10th ave) - but Holland generally had lighter traffic. I was not to be reasoned with. I was pleading for David to turn around and take me home, then begging for a police escort. He chose the Holland Tunnel. Good choice it turned out. Traffic moved swiftly, despite it being 5:15 and soon we were in Manhattan.

By now it felt like I was being split in two by a red hot bowling ball. I couldn't believe how horrible and strong each contraction was. I was pleading with my body to slow down - I even remembered that sometimes labor stalls on the way to the hospital because adrenaline kicks in and slows progress. No such luck. In between contractions the wind blew from all open windows - endorphins kicked in and I felt blissful and calm. Then I'd get slammed again, now with the overwhelming need to push and I have to talk myself into holding back. "You just THINK you have to push...you don't really," I tried to reason. For all I knew I may be only halfway there and find I was only 5 cm dilated...wouldn't that be a relief? But I could tell I wasn't halfway there - I was all the way there and I was in a stupid car, on my knees, driving up the West Side Highway.

David was trying to calm me down but he may as well have been a thousand miles away. I was on my own and I was determined not to have this baby in the garbage-strewn back seat. In between contractions, it took every ounce of strength to pick up my cell phone and make a few calls. I needed to get Courtney and Nan to the hospital - they were supposed to help me through this labor. Two quick calls - speed-dialed - strained urgent messages left. Next - babysitter. This woman has had SIX kids and all births were under two hours. "Maryellen," I panted into the phone, "I'm in labor. I'm really afraid I'm gonna have this baby in the car..."

"Calm down," she said, "If you have it in the car, it's okay -- you won't be the first."  Somehow that made me feel relieved. I hung up, clutched the car seat, and weathered another enormous contraction.

It wasn't this way with Bebe's birth. Those contractions - though intense and awful - were like ocean swells - predictable...manageable. This was a goddamn tsunami. I opened my eyes and saw that we were already on 10th ave and in the 30s. Okay...I'm gonna make it, I told myself.

At St. Lukes-Roosevelt David dropped me off and raced to park the car. A faceless guard helped me into a wheelchair and a moment later I was in the birthing center on the 11th floor. Midwife Sandy and a nurse helped me undress and get onto the big double bed. I was crying to Sandy that I wanted to push and she was telling me it was okay to give in. I heard her say something like "I hope her husband makes it back in time." A moment later David was there and I was holding onto him for dear life. I was laboring on my side and now finally I was free to push. Just like last time I really didn't enjoy pushing part; it was hard work and besides it hurt like hell. However, each push seemed to really move this baby along. It wasn't so much that pushing was easier with this labor, but that each push was so much more efficient.

A few seconds later and the head was almost out. However, her heart rate had dropped to 70 bpm and should be closer to double that. "Jayne, I'm going to give you a little episiotomy," Sandy said, clearly concerned. When I protested she said, "Okay, then...next contraction just give me one more good push and this will all be over with."

All over with...the concept seemed so elusive, yet so tantalizing. Next contraction hit - I gave it my all, and the head came completely out. But what's this? The baby was crying! How weird, I thought, lifting my head to take in this sight. Half in, half out, and wailing away. Then, one more push and she wriggled out and was on my belly in a second. I was completely blown away; it was so fast and furious. She was crying, I was crying, it seemed unreal that 2 hours ago I was home watching TV.

I didn't know I was having a girl. A total shock, but a happy one. She has straight black hair and looks nothing like Bebe.

Alas, I only needed one little stitch (NO episiotomy). My friends showed up about 15 minutes after I delivered. Courtney thought the nurse was joking when she said I had already given birth. We all sat around and relived the story - giddy with the rush of the experience. David and I made our phone calls - then all of us had a little celebration with Mexican food and chocolate milk....and finally I got to sleep.