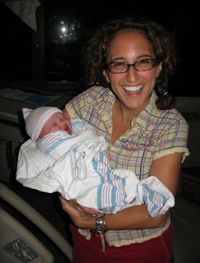 After the birth of my two daughters, I started my own public access show called Mamarama as a vehicle to teach about pregnancy, birth and becoming a new parent. Five years later I became a Certified Childbirth Educator and have worked all over the tri-state area as a newborn care and breastfeeding instructor in addition to teaching childbirth education. I am also a postpartum doula working with new families during their transition into parenthood and I lead several support groups for parents. In 2012 I was selected by MTV to teach a childbirth class on one of their highest rated shows and for two years I worked in 4 different Jersey City high schools teaching pregnant teenagers about birth and parenting. In 2013, I was part of an initiative to help 22 New Jersey hospitals create support groups for postnatal women as a means to identify and treat postpartum mood disorders.  I continue to teach, write, blog and film about topics that inspire me in the field of women’s health and the perinatal experience, specifically maternal mental health. Links: Jersey City Times