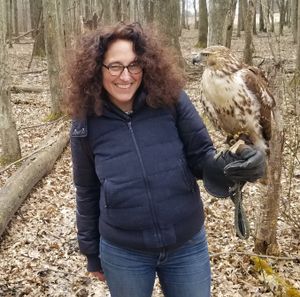 My friend Nolan Price and I drove over 3 hours out to western Pennsylvania, to a tiny town called (somewhat bizarrely) Jersey Shore. We were on a mission to meet and film Tierney Clark a young falconer with a very interesting back-story. I found Tierney on Instagram and was immediately mesmerized by her images and the grace with which she handled her bird of prey. This wasn’t exactly a newfound interest of mine. I had forever romanticized my original last name, Falconieri (before I went with the simplicity of "Freeman") which seemed, I imagined, to imply a “long line of Sicilian falconers.” Though practiced since antiquity it’s said that Medieval Arabs brought the art to Sicily somewhere during the 10th century. Since I was a kid, I imagined myself with a majestic bird flying to me from a tree and landing gently on my gloved hand. Somehow I missed the idea that this also involved hunting; I was wrapped up in the notion that I would someday return to Sicily and practice falconry in my "golden years."

My first online persona was "Raptor Girl" (on Myspace, no less) where I pretended to be involved in falconry; my WiFi connection has always been "Falcon's Lair" (which every teenager who has ever been to my house knows.) Once in Liberty State Park I watched a raptor demonstration by a woman and her dad. Intrigued, I went over to chat with her and asked how I might get involved in falconry. Her answer jolted my fantasy: "Well, first you’ll have to trap your bird in the wild." I don't know what I had been thinking - that I could just get a bird of prey in a pet store, at the mall? I clearly was immersed in a fantasy version of what it might mean to be a true "Raptor Girl.” Flash forward several years—along comes Tierney and she IS the real deal.

I thought perhaps I could interview her while Nolan would get some video footage of her hunting with her bird, Spirit. I learned that hunting season was coming to a close, March 31st, so we hadn't a moment to lose. I also didn't know that each season she traps a different bird, trains her, then sets her loose in the Spring. Tierney told us that after just a few weeks the birds, formerly tamed and accustomed to her, would no longer come to her hand or even remember that this life with humans had ever existed. She told us of the first bird she trapped and how she had gotten loose in Tierney's truck, almost causing a roadside catastrophe.

Tierney, in a serious and solemn manner, recounted her history for us. She grew up with a single mom, one of four kids including a disabled younger brother. She had no relationship with her father and was told (falsely) that her paternal grandparents had no interest in knowing her. Once Tierney was a little older and had her own child, her determination to connect with her paternal grandparents escalated. At the same time, in this rural part of PA, she realized that hunting with a rifle was not the sport for her - so she pursued falconry.

When she put the word out on social media that she was looking for a sponsor (a falconry mentor) she was pointed to a man who turned out to be her great-uncle on her father's side. This dovetailed nicely with her ability to finally connect with her paternal grandparents. Unfortunately she learned that her grandfather was gravely ill and she didn’t get to meet him before he passed away. On that first visit to see her grandmother, Tierney noticed a bald eagle flying right over her truck and heading into the mountains that frame her small town. As she had hoped, her grandmother embraced her with loving arms, delighted to see her kin after two decades of absence. When Tierney returned home after this emotional visit, her mother presented her with a surprise: A canvas she had long hidden away, of an eagle flying into the mountains—painted by none other than the grandfather Tierney didn’t get to meet.

That story and more were part of today’s discovery and I felt honored listening to Tierney’s retelling. We filmed her for hours as she sat patiently perched on a tree branch, occasionally shivering through her words. Eventually, she recounted the story of her mother’s death to cancer and how working with raptors have provided healing, therapy and moments of joy.

For me, finally having a hawk come swoop to me from atop a tree, landing delicately on my gloved hand was a dream realized. I felt completely calm and somehow prepared for the weight of her body as she gripped the glove with her talons. She scrambled for the scrap of squirrel and eyed me with flat curiosity. It was an exhilarating moment and I have to thank Tierney for opening up her world so candidly for us—just two strangers from Instagram.

Stay tuned for the video version, by Jayne FALCON and Nolan PRICE. 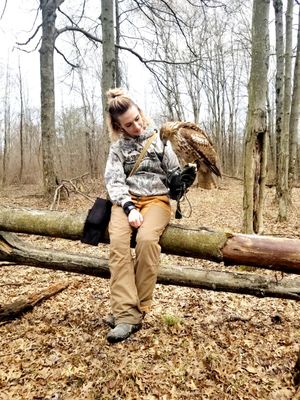