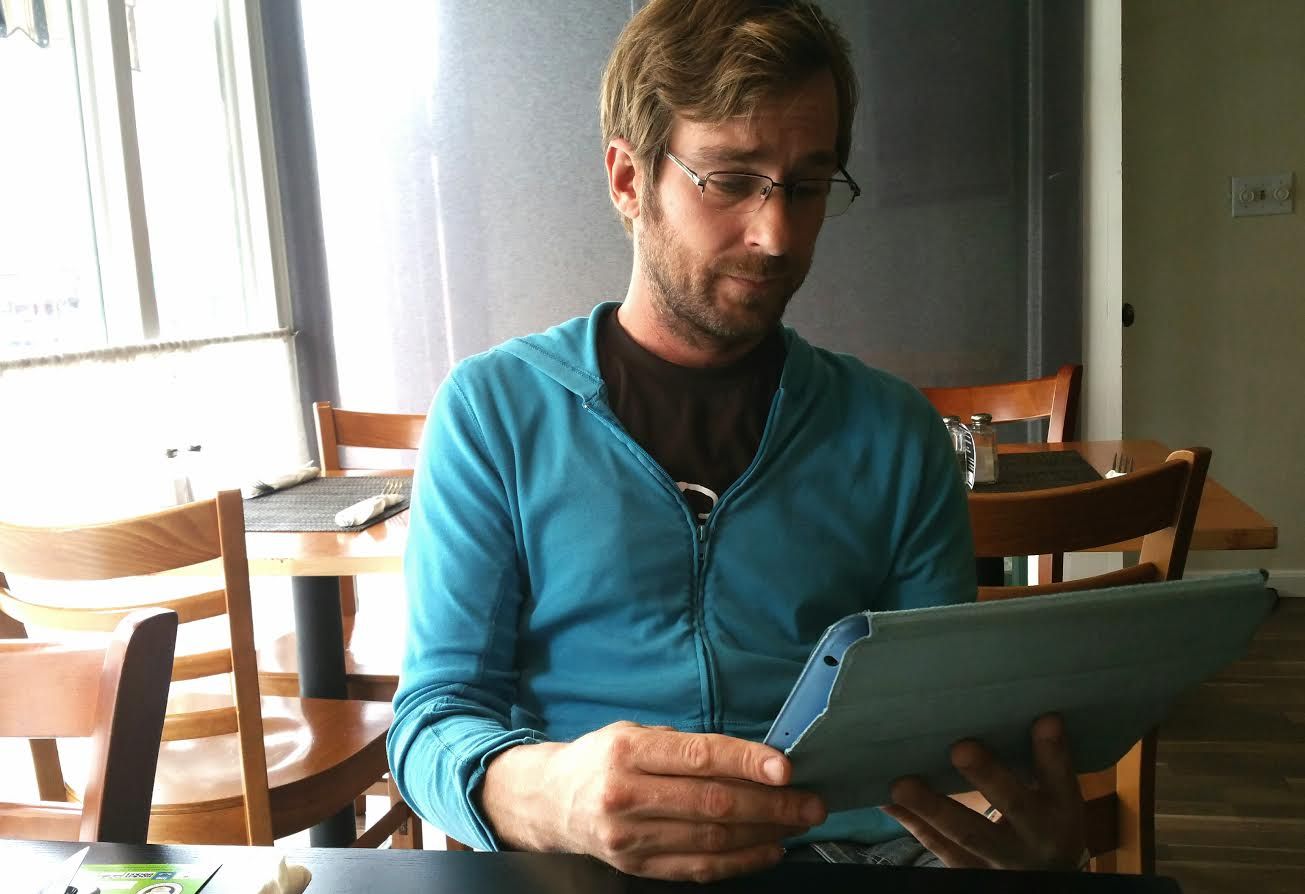 Bike JC, our local citizen-based advocacy organization was also saddened and concerned by the news, knowing that many of our streets were not bike-friendly at the time. The city has since laid miles of bike lanes and raised safety awareness, yet an accident like Natasha’s brings attention to the simple fact that anyone can be struck down in the blink of an eye.  Later that year in the winter of 2014, another young woman, Ayako Okabe, was struck on her bike while crossing the very busy US Route 1-9.  That entire roadway, with its narrow lanes and heavy truck traffic, would be considered an extremely unsafe biking route; Ms. Okabe was traveling on it after dark, possibly to cross from the west to east side of the highway. This victim was also left behind by the driver responsible, though it has been suggested that the driver was unaware of striking a cyclist.

Kris Reiss, Bike JC Vice President and his friend, Patrick Conlon, also a fellow Bike JC member, decided to create a ghost bike to memorialize each of Natasha’s and Ayako’s untimely deaths. The two filmed a short video documenting their construction of Natasha’s bike, linked here. Ghost Bikes serve as a silent and melancholy way to memorialize the loss of a bicyclist who would otherwise have just been another vehicle casualty. The bikes are always painted white and often contain a plague with information about the deceased. Some are festooned with flowers and photos – but all of them offer a way for locals to recognize the cyclist with a visual reminder. “It’s an impactful way to create a memorial to the victim as well as highlighting advocacy for pedestrians and cyclists,” explains Kris. “It’s also an extremely re-producable model.”

Although ghost bikes are frequently seen on the streets of New York City they are a rather unusual sight for Jersey City. Anyone unfamiliar with this form of tribute might think the white bicycle is someone’s idea of a prank or a possible art project. For these two victims each bike disappeared shortly after it had been installed.  Kris concedes that a ghost bike alongside the industrial Route 1-9 could easily have been removed and scrapped. Though Ayako’s death certainly deserves to be remembered, it happens to be a difficult spot for a ghost bike to reside for the longterm. 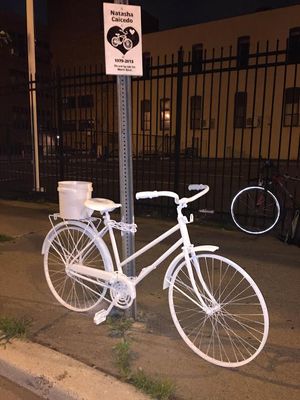 Shortly after Natasha’s death her ghost bike was attached to the fence of St. Peter’s Prep where it was promptly removed. Kris and Patrick tracked it down and by a stroke of luck it had not been discarded, but tucked away in storage. They re-chained it to a street sign close to the scene of the accident where it remained for only three months or so. “We don’t know who removed it,” Kris says. “It’s entirely possible that someone thought it was in the way of potential snow removal for the winter, but no one really knows.”  Meanwhile, Natasha’s widower, Christian, had been regularly visiting the bike, which served as a way for him to mourn and contemplate. As his wife had been cremated and her ashes brought back to Russia, Christian had no cemetery or memorial to visit and grieve beside. He says, “That bike was the main way I had to connect to Natasha’s accident. I would go there frequently, bring sunflowers, and just sit by it for hours, crying.”  Christian explains that before the bike was removed her commemorative plague went missing. “Who would steal a plague in memory to someone?” he wonders. “There is no consideration for the family or reason why!”

Two years after the tragic accident that changed Christian’s life he is optimistic about the future. “I took some time for mental recovery in the Virgin Islands and managed to find someone to share my life with again.”  Coming back to Jersey City and facing the restaurant he and Natasha had created brought many emotions to the surface.  “I felt like I had to first redecorate after our hiatus, just to make it a little different than it was,” he explains. “Then my partner [Charles “Chuck” Heo] and I decided that as a small business we’d like to give back to the community, as they gave to us during our darkest time.” On June 12th Kraverie launched their re-opening with a fundraiser benefiting Bike JC. Items raffled included a 4-person sail around New York Harbor catered by the restaurant, of course.

“It’s interesting that the ghost bike is connected to members of Bike JC,” Christian says. “Not only were they the first organization we thought to raise funds for, but back in 2011 when Chuck and I were still in food trucks, we catered their big Ward Tour. Someone there gave us the tip that there was a storefront available near City Hall where we should consider having an actual restaurant. So, this really comes full circle, just at the anniversary of Natasha’s accident.”

As this story was going to press Mayor Steven Fulop, together with DPW Director, Mark Redfield, agreed to officially give the next ghost bike for Natasha a permanent home. It will reside on Marin Boulevard just past Grand Street where it will hopefully remain untouched.  Plans to find a final spot to commemorate Ayako are still in the works; Bike JC is determined to give all victims a tribute.

“I know that no one in the community will ever forget Natasha,” Christian states. “But this is a message to everyone in the area to be more careful on the roads and for cyclists to take heed too. Anything can happen when you least expect it.”

Top photo: Christian watches, for the first time, the Bike JC video showing the creation of the ghost bike memorializing his wife’s death by a hit and run driver. (Photo courtesy: Jayne Freeman) 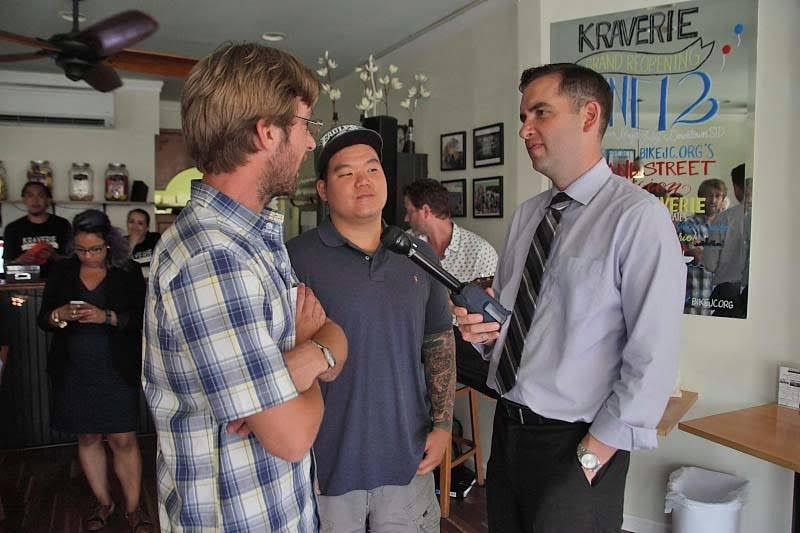